Conditional release in the works 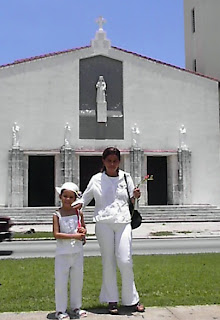 I received these pictures from Gisela and she gave me permission to post them on this blog. These were taken on Father's Day. Masiel and Gisela are regular attendants at these peaceful demonstrations of the Damas de Blanco.

It's been a while since I last updated this blog, but I am able to share some good news. I spoke with my mother about a week ago and our family in Cuba reports that my uncle's attorney is in the process of petitioning for a conditional release. As a first step, he will be transfered to the medical facilities in El Combinado del Este (a prison in Ciudad Habana). It is expected that, once there, he will be given the treatment he needs and subsequently released and placed under house arrest. Several other members of the group of 75 have been released for health reasons under the same conditions. We see this as a positive development and await anxiously news of Tony's transfer.

Prior to the arrival of these wonderful news (which we received with cautious optimism), Gisela had informed me (via e-mail) about the deplorable conditions in which they transported Tony to a doctor's appointment at the local clinic. Despite his weak physical condition, he was handcuffed and placed in the cargo compartment of a truck with no ventilation. I must confess that I can only assume that the Cuban authorities must have a unique standard for prisoner handling. Based on my very personal experience, I can tell you that sick Iraqi detainees (i.e., those captured by Coalition Forces) were transported in air-conditioned Humvee ambulances. If too weak to walk, our standing operating procedure was to place them in a stretcher and, if dehydrated, to hook up an IV with fluids. Quite a contrast, isn't it? 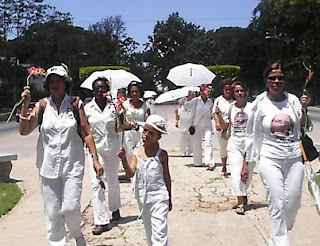 There isn't much else to report. I did want to share with you, however, how my uncle's plight manages to seep through my daily routine. I have become obsessed recently with Joan Manuel Serrat, a Catalan artist with a huge following in Latin America and adored in Cuba (in fact, my dad introduced me to him). He is what might be classified in the States as a folk singer (although his sound is in no way related to American folk music). At times, he has borrowed others' poetry to craft phenomenal songs that are works of art in their own right. One such poet to be graced by Serrat's muse is Miguel Hernández. My favorite adaptation of Hernández's poetry is Para La Libertad. As you might imagine once you read the lyrics, this song brings me to tears every time I listen to it. Another song I would like to bring to your attention is L'Estaca by Lluis Llach (a song also covered by Serrat). Because of Serrat, I have also developed a fascination with the Catalan language and have sought out other singer-songwriters of his generation. As Franco's dictatorship waned, Llach wrote this song, which is open to a great deal of interpretation. Every time I listen to it, my thoughts fly (to paraphrase Verdi) to the situation in my native land. The lyrics are in both Catalan and Castilian.
Posted by Marielito at 4:05 PM