Tony's back in isolation in Canaletas 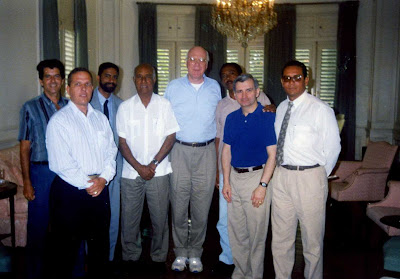 The news from Cuba is not good. And I am not referring to the OAS' readmission of Cuba as a member nation! This past Monday (a day filled with terrible news about missing aircraft and cold-blooded murder), I received a call from my mother with an update on my uncle's situation. Unbeknownst to me, Tony had been taken from the hospital in which he had been recuperating from his colitis for approximately 8 months and surreptitiously moved to an undisclosed location. On Friday morning of the same week, Gisela, Tony's wife, received his personal effects. Despite repeated attempts to gather the facts from State Security, Gisela had no information about Tony's exact whereabouts and condition. You can imagine the level of anxiety within the family.

The fact remains that Gisela is still waiting for the official word from the Cuban government. However, our sources (the Cuba Encuentro site and the Uncommon Sense blog) were reporting (within minutes of the phone call from my mother) that Tony had been transferred back to the Canaletas prison in Camagüey. The abrupt departure from the hospital (despite his colitis diagnosis) was the result of his refusal to wear the uniform of a common criminal--a humiliation for which he would have been rewarded with confinement in La Habana under milder conditions. Instead, the authorities punished him with confinement in an isolation cell, which is barely larger than a cage and consists of a slab to sleep on and a hole in which to perform his bodily functions.


On a more positive note, Tony's daughter, Yenysel Díaz Sánchez, is in the States and has been spearheading the effort to get the word out on the inhumane treatment of her father. She has been making the rounds of the Spanish-language talk shows in Miami and is working with the Christian Democrats to get the word out in Geneva.


As usual, I'll be doing the same on my end. At a minimum, Tony's family is asking the Cuban government to return Tony to a medical facility and to desist in its attempts to get Tony to accept common criminal status. In the picture I've posted, you'll recognize Oswaldo Payá Sardiñas, Tony, Oscar Elías Biscet, and Senator Patrick Leahy (among others). I am very fond of the great state of Vermont and I am glad to see that Senator Leahy has an interest in promoting political freedom in Cuba.
Posted by Marielito at 11:38 AM