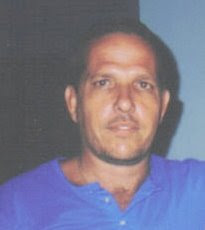 This is my English-language translation of Gisela's appeal posted to Osvaldo Paya's blog. Gisela sent it to me via e-mail, but I realized later that it's almost the same copy she sent to Osvaldo's site.

To all human rights organizations, the International Red Cross, national and international public opinion, and all persons of good faith:

Antonio Ramon Diaz Sanchez, 45 years of age, was arrested as part of the repressive wave of March 2003 and sentenced to 20 years in prison, which he is currently serving at the Canaleta Provincial Prision in Ciego de Avila (more than 500 km from his home). He was imprisoned for his commitment to the defense of his countrymen's human rights as an active member of the Movimiento Cristiano Liberacion and participant in the Varela project.

My name is Gisela Sanchez, wife of Antonio. This is the second time I reach out to you through this medium to ask for your support on behalf of my husband and his well-being. In March of this year, Antonio was subjected to a medical examination which resulted in the diagnosis of several ailments. His state of health has declined considerably as a consequence of the stress associated with his confinement. He suffers from ulcerative colitis (although a proper biopsy cannot be performed because the walls of his colon are too fragile and swollen) and amebic colitis. He also has first-degree adenomas in the prostate, as well as an obstruction in a coronary blood vessel, and a 6mm kidney stone. Most of these diseases require a diet which is not being made available under his current prison conditions. The situation is so desperate that my husband has had to assert to the authorities that his inadequate diet is a deliberate attempt to damage his precarious state of health.

On various occasions, I have complained to the relevant authorities about the inadequate medical care provided to my husband because he is not being treated by the appropriate specialist for each ailment and the few times he has been taken to the hospital he has been transported in a degrading and subhuman fashion. He has been exposed to high temperatures in the enclosed cargo space of a small truck (without any sort of ventilation), broiling in the sun for more than an hour, resulting in dangerous drops in his blood pressure and heat exhaustion. It is imperative that I also mention Tony's repeated protests against the irresponsible attitude of the authorities when it comes to the delivery of the medications that are so critical to his treatment and recovery.

Keeping in mind the deteriorating health of my husband in the last four years of confinement, you can imagine his family's anxiety. In accordance with the constitutional guarantees in the penal code, and through an attorney, I appealed to the Supreme Court for a commutation of Tony's sentence to conditional house arrest for health-related reasons. We have been waiting three months for a reply, but no reply has been forthcoming from the Court. In the meantime, Antonio's health worsens in the squalid conditions of a Cuban jail. While we wait, Antonio continues to be denied access to the type of expert medical investigation and treatment that is likely to reverse the course of his decline. It is my sincerest hope that this message will encourage your organization to reach out to the Cuban Government, in whichever manner you deem appropriate, and request the immediate release of my husband so that he can get access to the medical attention he lacks in prison. I thank you for your time.