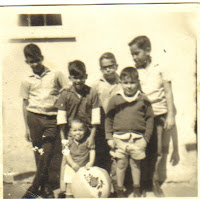 I couldn't find any more recent pictures of my uncle, so I decided to post one of the old ones. I am the kid with the pacifier and the beach ball. The other kids are uncles and second cousins. Tony is the geeky-looking kid with the glasses.

I just had a quick chat with Gisela and she is in very low spirits today. She has an appointment at the Spanish Consulate today, at which she is expected to present evidence of the regime's violations of its own laws and regulations in the handling and treatment of prisoners. Her lawyer was expected to come along, but he changed his mind at the last second for fear of reprisal. I believe that is the type of behavior that can get someone disbarred in the States (or at least sued for malpractice).

While I can appreciate that his reaction is typical of the average Cuban living in the island today, I find it hard to believe that this was the same person that defended Tony so ably at his trial. Harassment by the security services and the local Committees for the Defense of the Revolution is a very powerful weapon often deployed by the regime to silent the opposition. These had no effect on my uncle and, unfortunately, he is paying the consequences today. As much as I wish he would have gotten on a plane the day he got his exit visa back in the 90's, I applaud his courage and consider him and his imprisoned colleagues to be the only real Cuban patriots. Anyone else that wishes to lay claim to that title is merely a cheap impostor.

Of course, it seems that not even Tony's own defense lawyer is willing to draw the slightest inspiration from this example and make a stand for the sake of the rule of law or due process. Should my uncle die in prison, I can already see him canonized by future generations of Cubans--perhaps even some of the same individuals that are sitting by the sidelines (sunshine patriots, as Tom Paine would have called them). I don't want Tony to become a martyr. I don't want eulogies, songs, poems, posters, or any of the other media reserved for the thousands of martyrs that have put their lives on the line for their little island paradise.

In any case, I digress. Having no other alternative, Gisela will meet with the Spanish Consulate today. I tried to give her the courage to go through with it. I hope she does. The Spanish Government seems to have taken a humanitarian interest in the dissidents that have fallen ill and they are gathering facts. Let's hope this is all being done in preparation for a follow-up discussion with the Cuban Government.
Posted by Marielito at 12:44 PM